The great thing about social media is that everyone has knowledge and no one is a novice. That’s my opinion.

I am never ceased to be amazed at how much I learn from a whole range of people, regardless of how long they have had interest in social media and what level of interest that is.

Sure, there are gurus and some special individuals out there I follow who I could chat with and listen to all day, digitally and in person – their knowledge seems incredible. Don’t forget, however, that we are all learning about social media; the boundaries of development remain undefined and that is why listening and taking appropriate action is so important.

Indeed, two-way engagement is now even more pivotal to the success of any project than it has ever been. That may involve social media, increasingly a channel difficult to ignore as part of any plan, as part of the marcomms mix.

It has even been touted that promoting a sustained two-way marcomms strategy is now also rendering ‘campaigns’ per se redundant. I found this blog by Jim Garrow, Death to the campaign!, particularly insightful and thought-provoking.

So, clearly, the world around us has evolved, is ever-changing. Simply directing time-specific, time-limited messages to segmented targets through mass media is now being superseded by sustained interactions.

Which is why a small, seemingly insignificant, situation I recently found myself facing has been niggling away at me for a few weeks now.

Off the ball
In early September I put myself through an emotional rollercoaster at Hampden Park for Scotland’s opening World Cup 2014 qualifying match against Moldova. In some ways perhaps missing the first 17 minutes was a blessing, given the 1-1 scoreline, subsequently compounded by drawing 0-0 against Serbia days later.

But why miss the first 17 minutes? It wasn’t intentional and certainly not my doing, that’s for sure: we were stuck in the ticket queue outside and had been for a significant amount of time (pictured, just after kick off). I could probably dedicate a whole post to sharing our story behind the reasons why but won’t. 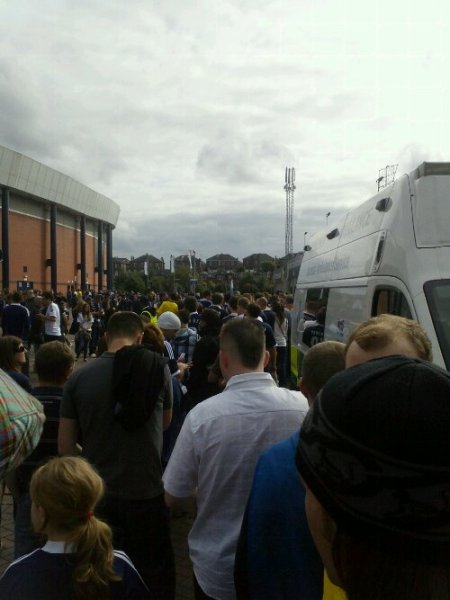 What irked me most, however, was the Scottish Football Association (SFA) sharing match coverage through Twitter then not offering any response to my tweet highlighting the ticket chaos ensuing outside. No recognition, no apology, no suggestion.

Sure, how organisation’s resource social media channels is a huge challenge when receiving significant volumes of incoming traffic, which in this instance is highly possible for a number of reasons. What is therefore required is a high degree of planning. Fail to plan, plan to…

#Scotfail
Indeed, I suspect Scotrail bear testament to this conundrum. If you’ve ever followed @scotrailsucks then you’ll not only witness how dissatisfied rail passengers can be with some First Scotrail services, but also the challenge the organisation faces in responding to that.

The Scotrail approach, from what I’ve seen, is to either invite tweeple to share their concerns by email or to simply ignore them – the latter also seemingly summing up the SFA’s approach.

Sure, they face a huge challenge but why use social media, a two-way channel, even if you are using it for public service announcements, to simply pump out messages without listening and interacting?

Social media is damaging your brand
If any organisation or company isn’t using social media then they’re missing a trick.

If they are using it but doing so ineffectively by focusing on brand promotion and not dialogue and engagement then they are most certainly damaging their brand.

That should be a huge concern as, ultimately, there’s no ‘I’ in social, and no ‘me’ in media.

Radical I know, but I don’t think organisations should be afraid to make small mistakes – as long as the learning is harnessed and built on.

The SFA and Scotrail, in my humble opinion, now have a great opportunity to listen, learn and develop their approach to engagement. Will they take it? Time will tell.

And don’t get me wrong, they’re not alone, not by a long way.

Social media opportunities are increasing and, used the right way, positive results even from seemingly obtuse positions are achievable.

The great thing about social media is that everyone has knowledge and no one is a novice. So, really, there’s no excuse for not putting learning into practice.

One thought on “Is social media damaging your brand?”