The story of our most atrocious bridge disaster has finally been aired on TV, is set for the big screen – and the expose should shake Scotland to the core.

I’m not referring to the Tay Rail Bridge collapse of 1879 which sadly led to the loss of 75 lives, but the financial exploitation, private financing, civil suppression and criminal convictions that occurred as a direct result of the introduction of the most expensive crossing toll ever charged in Europe: that of the Skye Road Bridge. 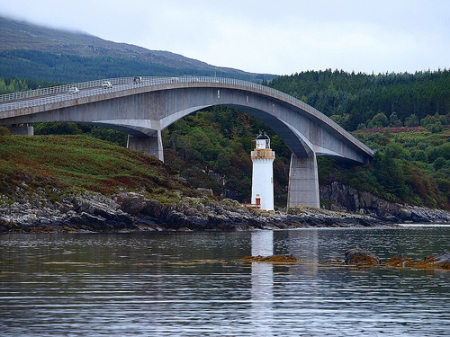 Skye bridge close-up, overlooking Eilean Bàn, the island being one of the main inspirations for Gavin Maxwell’s acclaimed book Ring of Bright Water.

The Tay Bridge disaster still ranks as one of the world’s worst for fatalities as a result of a bridge collapse and is certainly the most infamous in Scottish, indeed British history. However the way in which the people of Skye and Kyle of Lochalsh were treated and the criminal burden many bear to this day makes the Skye bridge story, for me, by far the most shocking.

BBC Alba last night aired An Drochaid – the bridge rising, a one-hour documentary charting the progress of the campaign to have the bridge toll abolished. It is well worth watching, especially if you’re looking for campaigning tips and inspiration: the creative tactics of SKAT (Skye and Kyle Against Tolls) were highly effective – low-budget, intelligently delivered and humorously entertaining.

Opened in Autumn 1995 and made toll-free in Winter 2004, the bridge was built to replace the ferry crossing between Kyle of Lochalsh on the mainland and Kyleakin on Skye, one of only two year-round connection points to the mainland.

The approximate £10-12 return bridge toll for cars, although radically more expensive than the £1 return cost for the Tay and Forth road bridges, was comparable with the previous ferry crossing charge. However, this contrasts against other bridges being built at the time with no charge for crossing – and as the Rt Hon Brian Wilson outlines in the programme, decisions were taken without the consent of the people resulting in a denial of democracy, especially for those on Skye directly affected.

It is clear to me in this case that, especially after watching the documentary, from the bridge conception to construction then traffic crossing, the people of Skye and Kyle faced a gross miscarriage of justice, most especially in the charges they faced in court and consequential convictions as a result of their protestations. 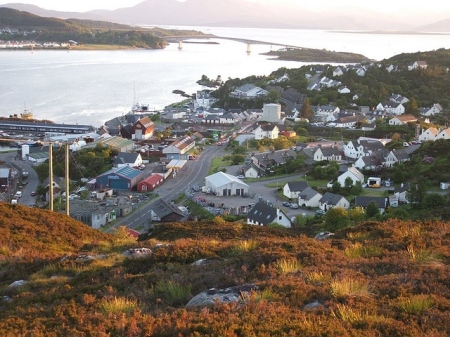 Looking North over Kyle, including the railway pier and then the old ferry slipway, to the Skye Bridge and The Cuillins.

While the story is complex and bears all the hallmarks of a traditional Highland rebellion, it is in truth a modern-day tragedy: the funding and bridge tolls were improperly administered and some of the evidence cited in the documentary would seem to support such a claim. Indeed it was American President Lyndon B. Johnson who declared:

If the wrongs, risks and harms had been properly evaluated I find it hard to believe that more collaborative, progressive and supportive management arrangements couldn’t have been sought.

During the nine years that tolls were in existence Bank of America, one of the private partners and the main financiers of the bridge consortium, are estimated to have recouped £33m in bridge tolls alone, with SKAT claiming the consortium received a return of £75m on a £25m investment… for a bridge that it is estimated cost £15m to construct.

Consider that the toll charges of over £4m per annum is all money taken from the local economy, in one of the most remote and financially challenged areas in Europe, then it is clear that a more rounded picture begins to emerge.

Although I can’t consider myself to be truly local, my family and friends are, so I know more than most the devastating impact such short-term policy and thinking has on local communities such as this. Indeed I’ve many memories of the ferry crossing myself: from witnessing my Dad setting sail with his crew-mates to help rescue ferries swept off-route and down-loch during Winter gales to sitting on board the ferry as a passenger in the basking sun during my Summer holidays.

I even began my 2004/05 Hogmanay celebrating the abolishment of the tolls on the slipway from where the old ferries used to arrive and depart, with a dram courtesy of the local MSP who had in his car boot a few cases of special whisky ready to share with revelers.

For whom the bell tolls

The bridge rising is truly a riveting story of David v Golliath; of the goodies, the baddies, the lynchmen and the linchpins. However there is no fairy-tale ending. People’s lives have been affected and in some cases significantly changed. The least that can be done is to quash the convictions. While it won’t repair the damage it will help restore justice. These are men and women who stood up for their rights and fought for them all the way, risking their own health and security for the benefit of future generations, quite possibly for you or I.

Looking South from the Skye bridge, a boat approaches the former ferry crossing point, between Kyle of Lochalsh to the East (left of pic) and Kyleakin to the West (right of pic).

“No man is an island, entire of itself; every man is a piece of the continent, a part of the main. If a clod be washed away by the sea, Europe is the less, as well as if a promontory were, as well as if a manor of thy friend’s or of thine own were: any man’s death diminishes me, because I am involved in mankind, and therefore never send to know for whom the bells tolls; it tolls for thee.”

Could you have done what SKAT and their supporters and allies achieved? Not many could. Personally, and I’m guessing you’d be no different, I myself would have to give serious consideration to the impact on my family and livelihood from having a criminal record, and being detained at Her Majesty’s pleasure for a week with the risk of a more severe custodial sentence.

What is certain however is that the tolls are now gone and Scotland is a better place for it. Yet the convictions remain and, to my mind, that is scandalous.

No man is an island especially, it seems, on Skye.
MarCommsKenny

Image overlooking Kyle then The Cuillins, courtesy of imagepilot88.

Image from the bridge, my own.